It was raining in Cape Town. I had packed but Derek still needed to make his lists for camping gear and car gear. Derek had been sorting out the ‘gadgets’. The laptop had stolen hours from Derek’s packing time as it had crashed the day before. I had saved all my research of places we planned to go to on my computer. Computers and technology can change me into a stark raving lunatic when things go wrong. Derek always takes it as a personal assault when I am mad at technology. We all know those times: technology is wonderful until it doesn’t work. Unfortunately the computer crash set my internal tone and raised my anxiety levels. I was angry because I had lost valuable time and effort but eventually I decided to take it as a challenge to roll with it and learn to be more flexible about the travel plans.

We had not pre-booked our accommodation and it was mostly a good thing because we had no idea how long it would take us to travel from one place to the next. Each day is an interesting experience in itself from this angle and I will be sharing some of them (good and bad) with you in the future.

We had planned to leave 2 days later but we were almost done and decided just to leave as soon as possible. ‘I feel like my brains are out of gear’,  Derek said as Brad, our friend, and I helped him pack the car. He was wrecked. I felt like I was his brains and silently felt sorry for him.

As we set off I took a deep breath in and feeling like I had just taken a giant leap into the unknown; I could do nothing more to plan and make the trip any safer or organized. Now it was sink or swim. I was choosing to swim. I began to check, in my mind, that we had done everything when I thought of  a friend who gave me a piece of advice, ‘remember if you leave anything behind there are shops everywhere you go where you can probably buy it.’ But only 5 minutes later we realized we’d forgotten the car license papers and had to go back; we made two more stops on our way out of town, which held us up: last minute visit to the auto mechanic and a stop at the Paarl Medi-Clinic (for work).

It was pelting down. We decided we didn’t want to set up camp in the rain so we headed for plan B: Sutherland and hoped we would beat the rain. There are many different dialects of English spoken in the South Africa and we got to experience them on our road trip. Some we really could not understand but our first bit of local advice, on which road to take, was to ‘trevel on the gravit road,’ which we did understand. It became an expression of our as we travelled on many gravel roads.  The road from Meitjiesfontein to Sutherland was a typical Karoo scene – low shrubs and  rocks which is known as the Tankwa Karoo National Park. It felt a bit like we were racing against time and sunset, through a desolate wild place, to find dry accommodation.

‘Sterre’ means stars in Afrikaans and is quite appropriate as Sutherland is where the South African Astronomical Observatory is situated. We sat outside the locked campsite and phoned Jurgen. ‘Yes. There is space for you,’ he said with a straight face. We were the only ones in the campsite. It was a very neat place as far as campsites go, with 9 ‘bays’ for caravans and 4X4s. The camp was part of Jurgen’s farm. The ablution block and kitchen scullery: were clean and had really hot water. As we had never travelled or camped before we had no idea what to expect and how to rate it but in retrospect it was one of the best campsites. But you will hear more about the campsites along the way, in future. 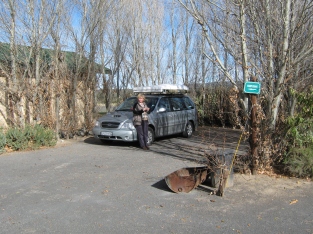 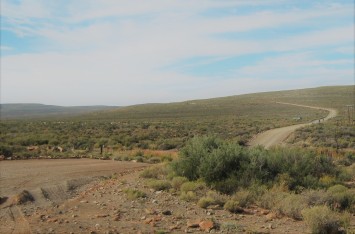 We went to bed with birds chirping in the trees – and indeed the sky was dark when we climbed into our rooftop tent. In the middle of the night the farm came alive with the sound of a donkey braying, a goose honking and ducks laughing. We slept for 14 hours, waking with the birds all sounding very merry so early in the morning. For breakfast we found a unique country restaurant on the premises. It was a rondavel: very cottagey, red checked tablecloths and curtains, and in the middle were a fireplace and couch. If it wasn’t for the fact that we had to call on our Afrikaans language, which I hadn’t spoken for a long time, I would have thought we were in the Great Smokey Mountains visiting Dolly Parton.

We had survived our very first day of road tripping!

Until next time – Take care,