Things become greener as we travel.
I enjoyed traveling through Namibia immensely. It was such an eye-opener to see how different landscape can be compared to back home in Cape Town and the UK where I had travelled before. Eventually the dryness and sandiness got to me and I started longing for green grass and trees again. 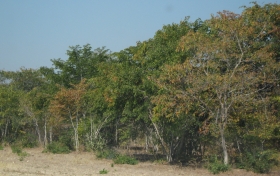 This is the road from Etosha Nature Reserve. I was happy to see trees again.

After we left Etosha Nature Reserve we stayed in Tsumeb at a campsite that was in suburbia. That night it was so very hot when we climbed into our tent that we kept the light off but the flaps over the windows rolled up and kept the net closed so that insects couldn’t fly in.

The next morning we answered emails and journalled. It was nice to start the day in a leisurely fashion for a change. Being on the go from early can get tiring. We bought sandwiches for the first time on our trip, for lunch. I had to speak Afrikaans again which I always feel embarrassed about because it is not my first language but as there were only ham and tomato sandwiches and I don’t eat pork I managed to convey that I wanted a meatless sandwich which they thought was very funny – that or my accent. Namibia was not known for vegetarian food at that time.

We were on the road again travelling to Rundu. We passed many little settlements.

The people living here are the Kavango people. They have goats and cows which are mostly seen grazing on the side of the roads.

There are also many donkeys; they and cattle are used for pulling carts for transport and carrying water.

A common form of transport for the locals.

Journal entry:
I was surprised to see every woman or child carries a bucket here on the side of the road. The little camps go on and on. The people grow maize and millet but they don’t have water or water pumps and as they are having a drought at the moment they have to fetch and carry their water. There are schools every so often and we have to slow down to 80km for about 5 to 10 km for the children’s safety as they all walk on the side of the road.

We drove through Rundu and continued to our next destination. 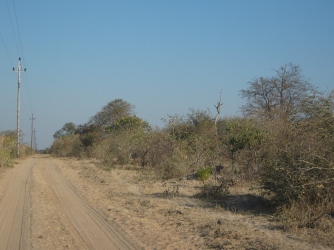 Back on dust roads, into the bush. Photo by Morag Noffke.

The turnoff to our final destination in Namibia.

Finally we were back on dust roads again, taking us to our last destination in Namibia.

I bet you won’t guess where we went, although if you have been keeping up to date with the trip I have mentioned it before. Otherwise you can find out next week.

Take care and remember … Life is a gift, be inspired and make it happen.

If you want to read the other posts from this series you can check them out here:

8 thoughts on “Back on the road, in Namibia.”