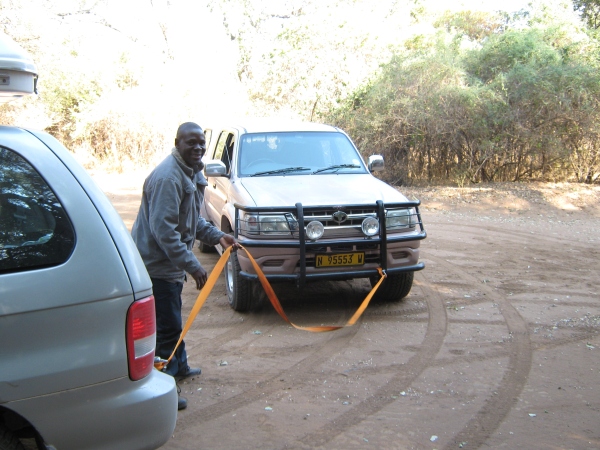 Popa falls, Derek’s experience.
The story continues from last week, Poppa Falls: The ups and downs, so as I told you I was beside myself with anxiety, fear and worry all wrapped up in one. You know when you get so worried when someone close to you is late and then when you see them you just want to blast them? Well I was that pent up but I also didn’t want to spoil our holiday with a bad atmosphere and of course I was overjoyed and relieved to see him back in on piece. When Derek did reappear he had to tell me all about his own adventure, he had gone to bay 4 and met the men who needed his help. It is best to let Derek tell you the story himself.

“Their Toyota bakkie (bakkie is South African lingo for truck) would not start and I went to help jump start their car. This didn’t work so I tried pull-starting it which also failed. At this point I asked if I could take a photo to send to Mr A, my friend, to tease him as he is an avid Toyota fanatic.  He has a sticker on the back of his Toyota saying ‘attach Land Rover here’ so I wanted to send him a photo saying ‘attach Toyota here.’ (You can find the explanation  here about Toyota and Land Rover bumper stickers here )

They then asked me if I could give them a lift into Divundu, the town nearby to get a mechanic to help them. When I agreed out popped two ladies from the tent and they said that they needed a lift as well. These ladies had stayed over with them after being picked up at a club the night before. To my surprise the one lady only had one leg. I felt awkward and embarrassed as the combination of her having only one leg and a very short mini skirt was made worse by the fact that we had taken the back seats out in order to fit our luggage in and she had to sit on the floor in the back.”

Yes I can just imagine how awkward Derek was feeling.

Caprivi Strip
Afterwards we were running two hours late; we still had to drive to the end of Caprivi Strip to the border crossing at Katimo Muililo, where we had to cross over to Zambia. First I want to tell about the environment of the area: Popa Falls, which really is a set of rapids of the Okavango River, (also known as the Cubango River in Angola), is caused by a geological fault. It has a 2, 5 meter drop over this section. The rock consists of dark quartzite. The water comes all the way from the Benguela Plateau in Angola underground, and surfaces to create the border between Angola and Namibia. It then continues on down through the Caprivi Strip to Botswana and the Kalagadi.

The Caprivi Strip is a narrow strip of land that joins up with Zambia making the shape of a pan-handle. This land is 400 km long and it is named after the German chancellor Graf von Caprivi who signed a contract with the British when Caprivi Strip was exchanged for Zanzibar in 1890. The road had thankfully been tarred in 2002. There is an abundance of rivers which drain from Angola into Botswana and so the Caprivi Strip is an amazing place for the grazing of herds of animals, including elephant. The vegetation is very dense as it is the tropical region so there is not much opportunity to see them. There is no fencing between the Caprivi Strip, Zambia and Botswana and the animals can roam freely where ever they want to. We had to drive cautiously and slower than we normally would because we were warned about animal crossings although we didn’t see any animals. All the towns were really just settlements and we were running out of places to get food, lunch and petrol. Eventually we came across Kangola, the last stop before Katimo Muililo.

Caprivi Strip, you can see the wetlands in the background.

Border crossing at Katimo Muililo
We had learnt our lesson with the last border crossing as we were naive to start off and when they had asked us how long we wanted to stay in Namibia we had thought that 10 days was long enough; we could have said up to 30 days because in Africa we could stay without a visa for 30 days in each country but we didn’t and so we ran out of time. So when at the Zambian crossing we stated that we wanted a permit for 30 days. The new challenge for us here was getting a foreign currency: the Zambian Kwatcha. I will tell you a story about our foreign currency dealings at a later date. What I learned for the first time in this modern building full of courteous officials was that Derek was deaf. No really! I had never noticed before. It could also have been because of their foreign accents but I could make them out clearly and so I landed up sounding like an interpreter for Derek, repeating everything they said back to him after he punctuated with ‘pardon.’ (After our travels he had a hearing test  and discovered he is significantly  deaf in one ear.)

By the time we had finished it was 5pm.  This was bad. We knew we couldn’t stay in Sesheka; it was a very rural looking place and we didn’t know of anywhere to stay. We were glad  that the men whose car Derek had tried to jump start had recommended that we stay at Cubu cabins. Cubu means hippopotamus. 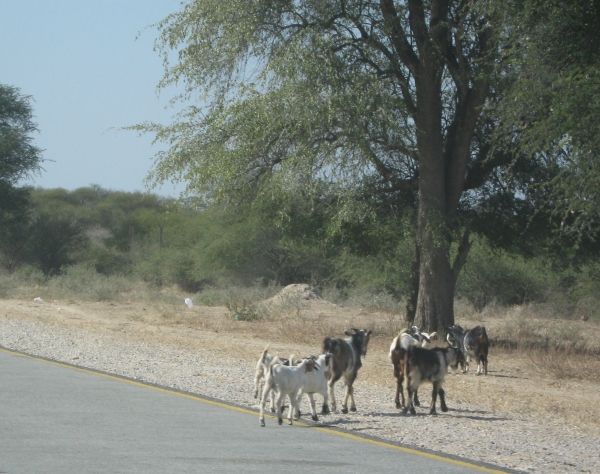 This is an example of animals randomly crossing the road.

Finding a place to sleep.
The man had said it was 40km from the border but it was getting late and we had been warned by everyone that it was not safe to drive at night because of the animals and people randomly crossing the road; and also because of the huge potholes. Some potholes were the size of a bath tub as a result we couldn’t drive faster than 60km/hr for fear of driving into a pot hole. The sun began to fall lower in the sky and eventually it was dusk. I was getting anxious again. We had no idea how much further we had to drive to get to Cubu cabins as we had already driven more than 40km. We felt like time was not on our side. We decided to turn around and ask at a angling resort which we had recently past. They said that we had not driven past Cubu cabins, and that it was still a long way. They had no room for us. They kindly asked the chef if his cousin might have room for us. We were told that we need just to travel a little further and turn off to the right and follow the dust road and when it forks to the left we take the road to the right.

By the time we found the road it was almost dark and as we drove down the dust road and the beams of our headlights shone we could see that we passed a shebeen (an unlicensed pub or tavern where alcohol is sold; originally Irish or Scottish word is sibin) and spaza shops (informal convenience shop usually run from home) while cows and goats were meandering in the road. It might be difficult to imagine but when my whole life I had grown up believing that Africa was a scary place I was really scared to be in the bush that night. It was tricky finding the turn off in the bush in the dark. We even took a wrong turn and a man came running to help us; he ran along the road in front of the car to show us the way and so we made it. This place deserves a post of its own. I must tell you that life has a way of teaching you lessons that you need to learn. Mine was to let go of control. Let go – everything will work out. I promise it was worth it when we woke up the next morning.

Next time I will tell you about our host and our surroundings.

Take care – till next time.

If you want to read the other posts from this series you can check them out here:

If you want to know more about our first part of the journey through the Northern Cape before we left South Africa you can find all the link here:

Here is where you can find all the links for the tip through Namibia
An African Road Trip: Namibia 2013

Here is where you can find the links for the next part of the trip through southern Zambia.

Our highlights in Zambia